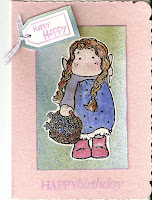 Quite a few birthdays are listed on the calender for September, so I took advantage of a quiet day to get some cards made. First one is a very glittery, girly card for Sarah. I haven't seen Sarah since her family moved to Spain a couple of years back when she was still pre-school. Hope she hasn't changed into a tomboy since.

The other card is a birthday card for Morag. The challenge card shown in an earlier post was from her birthday last year, it's not that she has two birthdays in September or even two cards! It's a similar style to the get well soon card I made earlier in the week...


I got some lovely ATCs from Ali of UKATC Yahoo group yesterday. In addition to my cards she added in some yarns to use and a bonus card, as well as some pictures cut out for backgrounds. All these goodies came in a decorated envelope; she's a very kind as

Tomorrow I'm teaching Beginners Quilting at Lorne Hill Farm in East Garston http://www.lornehillquilts.net/. My class handouts are all prepared and I just need to sort out some fabric and the rest of my kit for demos.

Email ThisBlogThis!Share to TwitterShare to FacebookShare to Pinterest
Labels: cardmaking