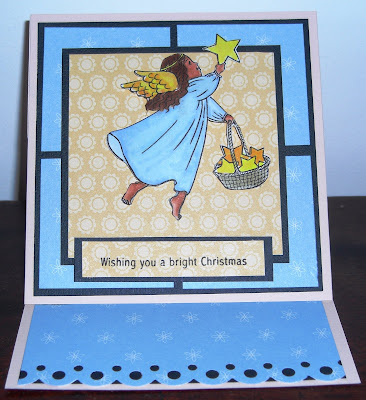 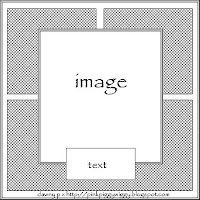 Phindy O'Neill's group on Papercraft Planet has the challenge to try something new. No, not a new image :), the challenge pushes a bit further than that. You must try out a new technique, tool or material. I've not been cardmaking that long, but I've been fairly adventurous and I've been racking my brains over this challenge. In the end, I've tried two new techniques so I'm pleased with that.

First, I realised that I have never attempted one of the easel cards that are so popular at the moment. I've even seen challenges specifically to make easels and for some reason I've shied away. There was a great tutorial on Splitcoaststamper's newsletter this week so I had no excuse.
I used Dawn's sketch from Papertake Weekly Challenge as the basis for the front of my easel card, love this sketch! And my second new technique came from the Copic Creations Challenge, which is being sponsored by Phindy this week. The challenge is to use ethnic skin tones in a project, all too often we reach for Caucasian colours for a card and never think to use anything else. When I looked through the images I have, it dawned on me that I've never coloured in an image as anything other than white. Mmm... quite shocking and thought provoking. I notice that both Mo Manning and Phindy O'Neill provide a variety of images, black, white, Asian and they seem very aware of this, no doubt because they're both children's book illustrators. So the second new technique just happened thanks to me reading the Copic Creations Blog.

I used Phindy's image Setting The Stars, colouring with Copics then cutting it out and decoupaging it onto Stampin' Up DP. OK the decoupage wasn't in the plan but the colours bled a bit from my angel's feet and this was a rescue mission :). The sentiment is a Woodware stamp and the inside sentiment comes from Imagepac. As the tutorial suggests I've added a border as a kind of "stop" for the easel, using a Martha Stewart punch. 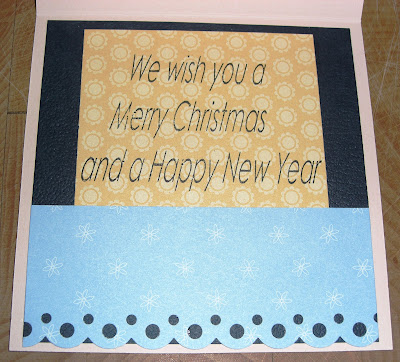 For some reason my photo doesn't show how raised up the angel is, I've used silicon glue and she looks so pretty against the background.
Posted by Anne at 11:42