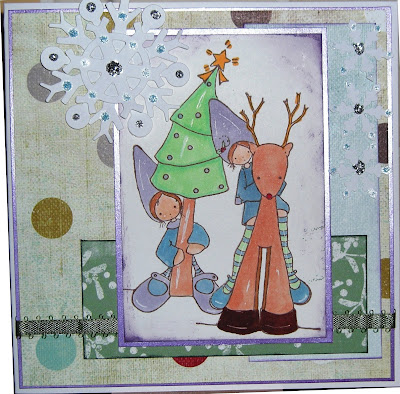 Happy New Year to everyone and I hope you had a wonderful start to the new decade, whether you were partying or spending time quietly at home. We've had the 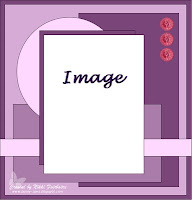 most frustrating start to the New Year, having planned to go to the racing at Cheltenham after collecting sons from various parties this morning. There were two inspections of the course, we had just about arrived when it was confirmed at 11.30am that the racing was on. The first race was run and it was clear that some trainers and jockeys were unhappy with the ground and there was a delay of nearly 3/4 of an hour while a deputation walked the course and finally agreed that racing continue. But over a third of the horses due to run were withdrawn, including most of the star horses we'd travelled to see. Whatever the decision, the racecourse staff would be unpopular, this seemed to be the worst of all worlds though... Oh well, such is life:).

Back to cardmaking, I finished this card last night, which began when I read Crafty Cardmaker's Challenge, which is called Favourites of 2009. No, I'm not listing my favourite cards, this is about new/favourite products or techniques and I've included several in my card. 2009 has been the year that I reverted to my childhood and enjoyed colouring in :). So my favourite new products have to be Copics, which I'm beginning to get to grips with. An also-ran for 2009 is Spellbinder dies; I'd just begun to use Nesties last year and they are high up on the favourite list. The technique that I've really enjoyed using is masking, following a demo I bought some Frisket mask and have really enjoyed combining images ever since, as I've done here with the two Whiff of Joy stamps.

I've used Nikki's sketch from A Spoonful of Sugar for my card, tweaking the circle into the large snowflake. The colourway is based on this week's Copic Colour Challenge, which uses YG03, BV02 and B93. I must be slipping, I only have Light Crockery Blue and had to substitute for the other two :). Lovely colourscheme though, which gave me the chance to use the spotty Fancy Pants DP which I bought and stroked but hadn't cut into. The green DP is a Magnolia paper that, again, I hadn't cut into. Small snowflakes are from a Woodware punch, large flakes a Spellbinders die, ribbon from stash.
Posted by Anne at 20:14