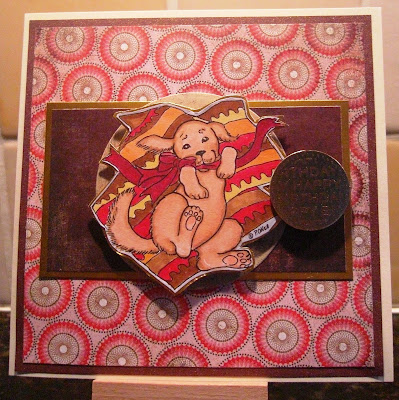 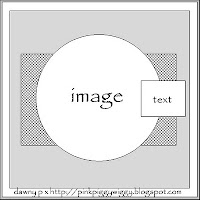 This is a birthday card for an old friend who has had a horrid few years, her husband died, she had some very bad health problems and cannot walk without a frame. But last time I spoke to her, she had decided that it was time to have another dog in her life; she found a dog that was in need of a home and that had some health problems of its own. She sounded so much happier and more positive about life now she has her new best friend to share her life and give her a reason to get up in the mornings.

I used an adorable image from Phindy's Place, called Gift Wrapped, coloured it with Copics, cut it out and mounted it onto gold cardstock then cut it out again. It's popped up onto foam pads and stuck to a circle of Basic Grey paper from the Infusion pad. The DP and the blotchy dark brown paper are also Basic Grey and the sentiment is by Craftwork Cards, I had a hard time taking a picture of this; it's metallic gold with brown lettering.