The most frightening fabric to cut in the universe... or finished is better than perfect. 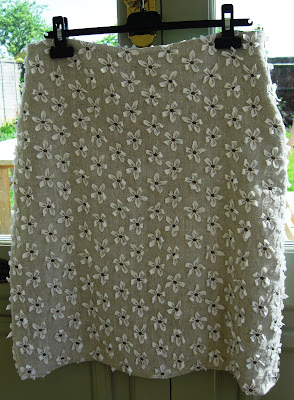 I've not done much cardmaking during the last week, partly because the weather has been so good and partly because two sewing friends have been cracking the whip about my lack of sewing :). Firstly, Marion came and spent a day with me working on the dreaded altar cloth. I had made a little progress on it since she last visited. After a solid session of cutting out and embroidering elements and attaching them I think it's starting to come together at last! I'll be so glad to pack that project back off to Marion when it's done!

Then I went to see my friend Kandy with a short length of fabric that I bought last summer. I have never paid so much per metre for a piece of fabric and I doubt I ever will :). I went to a sewing retreat last summer where I met the owner of a fabric shop in Devon, who made herself a skirt using the most gorgeous fabric. It's linen with man-made flowers sewn onto it and she had had two bolts woven for their shop, one white on white and one white on natural. If one wants to dye the fabric, the linen will take the dye while the manmade doesn't, so you can have any colour of skirt with the white flowers on it. I asked about the price and fell off my chair when I heard it. But by the end of the weekend I couldn't resist it calling my name, louder and louder, so .8m came home with me.

I didn't cut into it when I came home as we were due to go on holiday. I didn't cut into it when we came home. I was so petrified of messing up and wasting the fabric that it stayed in the cupboard. So Kandy came to the rescue. It needs as few seams as possible, no darts in the fabric. So she pinned and cut it to me in an afternoon and sent me home with stern instructions to finish it for a party I'm going to today.

I discovered a big problem for me with the fabric. There was an industrial iron at the sewing retreat, with lots of steam but less heat and Kandy also has a steamer. My everyday iron, used on the wrong side, sticks the flowers together. If I iron a seam then the flowers melt into an awful mess on the soleplate :(. The zip we put in on Thursday looked dreadful where we'd taken the side seam in and not cut down the bit where the zip was fitted. I've changed the zip and had another couple of tries at the shape, which is still not perfect. Somehow, it's also fractionally big around the waist. But the top I'm wearing will cover the zip and will also hide a safety pin to adjust the size.

But I made it! Thank you Kandy! Mental note: Avoid spilling anything on skirt at party today :)
Posted by Anne at 12:24

Email ThisBlogThis!Share to TwitterShare to FacebookShare to Pinterest
Labels: Sewing