Made By You - Elzybells Day 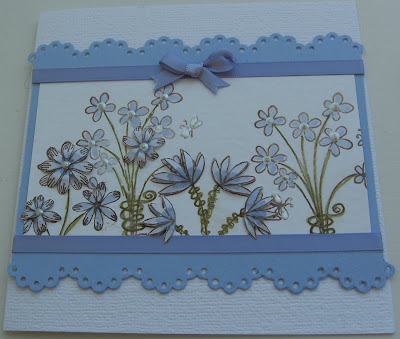 When I began cardmaking, I went to a beginner's class at Made by You in Swindon Old Town and really enjoyed it. I went to a couple more classes and then got out of the habit of going across; I don't tend to shop in Swindon at all. Then I noticed from the website that the shop was due to close and looking for new premises... Forgot about it until I checked recently to see if it had relocated and was surprised and pleased to see it's continuing in its current location.

I signed up for emails about the workshop programme and discussed it with my cardmaking friend Anne on Friday afternoon. We both had lots of things on for the dates that appealed, apart from the following day. So we rang on the off-chance that there were spaces and found we were the only bookings. We had a morning's workshop with Pat, the shop owner, just for the two of us, which was like having our own personal class - brilliant!

Pat showed us how to make four cards using 3 Elzybells floral stamps. The first one I've posted is probably the most complex. None of them was really difficult to make but each had a different technique. All the materials and tools are provided, all you bring along is yourself. So I found that made a really relaxing morning; all the decisions about which colour/stamp/layout had already been made and we just sat back and enjoyed the process. I've made a LOT more cards since last time I visited the shop, but I still learnt from Pat's demos. 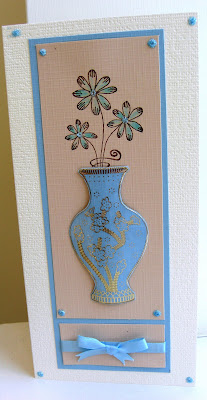 The first card uses 3 stamps, watercoloured with Tombow pens, some decoupage and Perfect pearls for highlights. The borders are cut with a Hello Kitty die cut from Sissix; it cuts two long thin strips, rather than edeges a piece of card, very effective. The join is disguised with ribbon. I'm really proud of my bows on the card; Pat showed me a great way to tie them; she even managed to demo left handed to me!

The second card is much simpler; again it's watercoloured. The vase is a clear plastic peel-off, stuck to the same blue card used to mat the image and cut round. Another useful idea I got was to use a syringe for the silicon glue to decoupage; maybe now I can use all the tube and not throw it out half way because I can't get any more glue out :). Both cards have suffered a bit from being workshop cards, the Stickles has spread a little on the second card and stuck onto the first card, which has lost a decoupage bloom. I'll try to be more careful next time :) I'll post my other cardswhen they get finished, all the makings of them came home with me.

The shop's well worth a visit if you're in the area; it's restocking after having been due to move so there are some bargains there. But the main stamps seemed to focus on good British manufacturers who produce affordable, quality stamps: Elzybells, Little Claire, Crafty Individuals...

Email ThisBlogThis!Share to TwitterShare to FacebookShare to Pinterest
Labels: MadeByYou