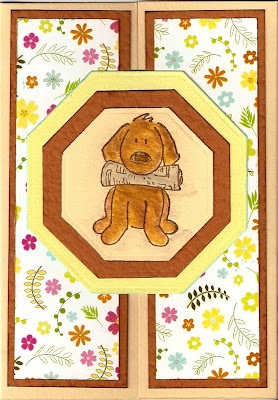 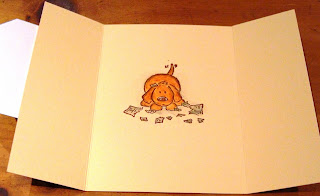 izabeth's challenge at Elzybells is to use more than one fold in a card. I had great ideas about using some of the folded card tutorials I've cut out of magazines and saved - but I can't find them! So I've made a good old gatefold card, which I really like :).

The image on the outside is "Dog Paper", coloured with Inktense pencils. His nose has Glossy Accents on it, so he's a healthy dog with a wet nose :). I've used my new Nestabilities dies from the Craft Barn (bought with a voucher won from the Ismaki Challenge - thank you!) and he's mounted on octagons of card. Mmm... think I need scalloped octagons too... smile. The paper is free paper from a magazine. Inside I've used "Torn Paper", again coloured with Inktense pencils.

I'm not sure who I'm sending the card to, I see the image as a "Sorry" card. I'm leaving adding the sentiment until I know who the cards's going to, I've saved a little of the tan card and will put it in the envelope to mat a sentiment when it's needed.
Posted by Anne at 07:53

Email ThisBlogThis!Share to TwitterShare to FacebookShare to Pinterest
Labels: Elzybells