The least and most - what WAS I thinking of? 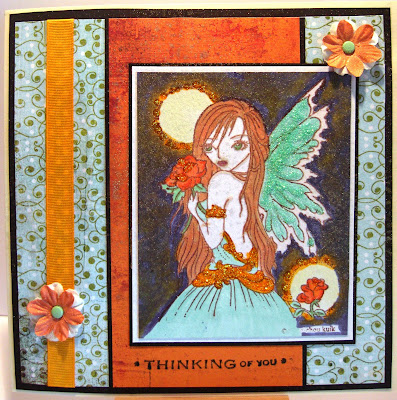 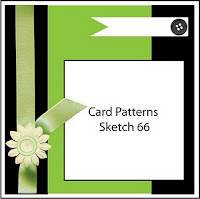 I've just completed this card and I'm really not too sure about it. Mmm... here goes:). My crafting friend Val was kind enough to bring over her new Sweet Pea stamps recently and I was the first to get them inky, stamping a few sheets of images. I've been rather shying away colouring these challenging images, there are some wonderful cards around made with them. First go was in conventional green and pink and looked ok-ish. I discarded it when I found a smudge that looked like a failed tattoo on her shoulder:).

So then I thought about the Crafty Cardmaker's Challenge which is to use your least favourite and most favourite colours, which is how I ended up with orange and green LOL! Don't get me wrong, it's quite a fun combo and I think the fairy looks great as a redhead. But then I've spent most of the day trying to find DP to work with this rather unusual colourway, ended up with Basic Grey Eskimo Kisses Christmas DP and some Basic Grey orange from the Green at Heart pad. A little odd, no? I'm also entering it for the Totally Gorjuss Challenge of Wings - and notice that one of their DT has a rather more polished version of the same image! Nice card Gez;). I've used this week's Card Patterns Sketch for my card's layout.

I'm fairly pleased with my first colouring attempt, these seem to need a dramatic background, so I gave it purple and went over it with light orange, which gave it a glow. Colouring is Copics and Stickles and when I'd finished I saw a tiny mark on the image so I oversprayed the whole card with gold Glimmer Mist as a kind of fake tan to disguise the blemish:). The ribbon has dots on the RS, which looked too strong so I used the wrong side. Sentiment is Hero Arts. What do you think? Hit or miss?
Posted by Anne at 16:40