Not even a mouse 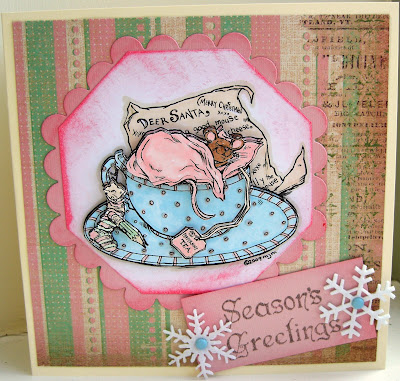 Here's my second card using Mo Manning's digital art: Not Even a Mouse. Isn't it the most beautiful image? It's in three layers, decoupaged. I got really excited that I actually have the right colour Promarkers to enter the Passion for Promarkers challenge this week and used them - only to notice that I should also have followed a sketch! Oh well, off on holiday tomorrow so I doubt I'll get another card done for it in time :). Hoorah, I've used Distress Ink (Worn Lipstick) on the edges of the image and the scalloped shape, so I can enter it in this week's Simon Says Challenge!

I've printed the image three times, coloured and layered it and added Glossy Accents to the tiny dots on the china. Cut out and matted using Nesties, cardstock and brads from the Stamp Attic, sentiment is an old stamp I've had for ages. I love the image and the detail, it was lovely to colour, don't think I'll be mass producing this for Christmas somehow, with 3 layers ;).

I was a bit worried last night that I'm regressing in my craft life a bit. I began with knitting, then cross stitch, then discovered quilting and became very creative. I did a bit of dressmaking which was also creative and produced something original and then I sidestepped into stamping. So last night I realised that, if I was asked what I'd been doing all evening, all I could really say was that I was colouring in pictures. Hmm... maybe I didn't do it enough at nursery school :). Maybe the easy answer is that I was enjoying what I was doing.
Posted by Anne at 16:00