I've got a summer cold and feel quite miserable, though it's not the dreaded swine flu I'm sure :).
I've not been up to much, craft-wise, but I've had a real lift this weekend. I took part in Whiff of Joy's blog hop on Saturday, good thing it's virtual and all those lovely crafters couldn't hear me sniffing and sneezing :). The new release is lovely, as you expect from Whiff of Joy, but there was a real bonus at the end of the blog-hop at Planet Patchwork: long "chats" with the two very talented designers, Alison Acton and Elizabeth Bell. I was lucky enough to be one of three who won a new Christmas stamp from Elizabeth Bell, isn't he sweet? I'm a big admirer of Elizabeth Bell and even before I won I was excited to "talk" with her, this was a real bonus. 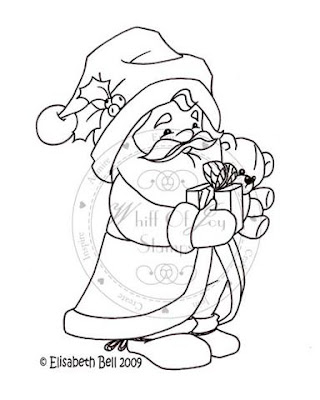 The icing on the cake came this afternoon when I learnt that I've won one of the new release from Shirleys2Girls, one of my favourite companies. Their trademark is framed rectangle or square designs with a fun image and a saying. They've recently starting adding several appropriate sayings to each stamp, making them even more versatile to use. They're not anything like as well known as Whiff of Joy (yet!) but they deserve to be better known, their stamps are unusual and a little unexpected, a lot of fun. 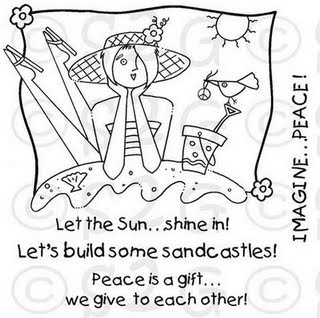 Thank you to both Shirleys2Girls and Whiff of Joy for their lovely blog candy, it has cheered me up :).

Finally, when I looked at the magazines in Smiths today I found their watercolour pencils were half price - £7.49 for 36 lovely colours. I have some of their set of 24 left over from when the boys did art at school and they're really nice quality. They're different from my Derwent Inktense, of course, but as good as any watercolour pencils I've tried. So if you need any pencils, try WH Smith - and yes - I did buy them - did you need to ask ? :)
Posted by Anne at 19:19