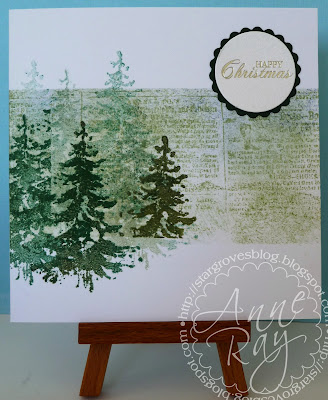 Happy World Cardmaking Day!  This week's Less is More theme caused some consternation; I never can decided what colour my eyes were.  In the end, OH and I agreed on greeny-blue - or was it bluey green?  The red tinge is only temporary after a late night, I've left that one out:).  This card is not particularly original, I have partly CASED a card by Chrissie like this before, but it is such a useful one to have that I've done it again. The text background makes it a bit different from when I made it before.  I've masked and inked a 4" card with Bundled Sage and Chipped Sapphire DI, overstamping it with my Impression Obsession big text stamp, using the Sage ink again.  Then Artemio trees, in Pine Needle and Olympia Green  Versafine were added after removing the Post-it notes.  The Craftwork Card sentiment, added to a Nestie scalloped circle in green, hides a sentiment that did not stamp clearly.
My card is for:
Less is More - colour of your eyes
Simon Says - anything goes
One Stop Card Challenge - just for men - I think this is a great masculine card
Oldie but Goodies - one for the boys - tree stamp is at least a year old if not two!
Partytime Tuesdays - anything goes