Less is More - anything goes 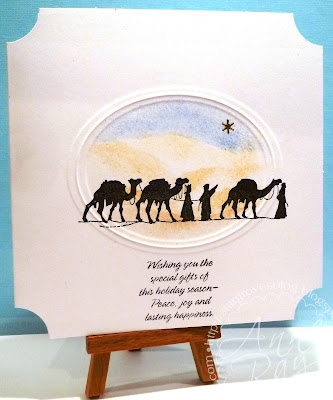 This week Less Is More is trying for a thousand entries now it has a thousand followers and with this in mind the theme was announced early - it's anything c&s goes.  I'm up for the challenge and here's my first card, which is a Christmas card.  I'm making a real effort to make clean & simple Christmas cards, preferably one layer, as adding all the embellies really puts the postage up.
So this is a one layer card, I've embossed an oval and brushed inks into it to make a desert style background for my three wise men, a Stamp Addicts silhouette stamp.  The sentiment is from an Impression obsession clear set and shock, horror, I've used a peel-off to add the star, first time in years.  I didn't want to risk my OL card warping if I embossed a star:).
My card is for the following challenges:
Less is More - anything goes
Simon Says - Sing it (We Three Kings)
Samuel Taylor - Christmas using a rubber stamp - FOUR Prima pads for this challenge!

I'm sure I'll have more entries for LIM later this week... back later to comment, we're off out to the County Show for the day:)