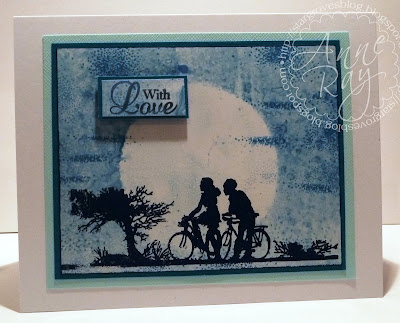 Here are a couple of cards I made tonight for Less Is More, where the challenge is Shades of Blue.  Today I went to Newbury Art Stamps Show, had fun meeting up with my friend Val and got really enthused by a brayering workshop I did with Vicki from Stamp Addicts.  It had a difficult start, you may know there are two sisters who run Stamp Addicts.  Just about the time Vicki was leaving the stand to set up for the workshop her sister suffered agonising stomach pains and was whisked off in an ambulance, leaving Vicki to try to get cover for the stand and come up to the workshop.  I can't imagine how difficult it was for her to compose herself and teach, catching up on the late start, but she managed really well and even better, Sarah was back at the show and feeling much better.

Like so many people, I struggle with my brayering and keep trying and keep feeling unhappy with my results.  The workshop was brilliant:  Vicki gave us two techniques to help.  The first was to use a spritzer so things blend and hard lines get lost, the second was a stamp for landscapes with tiny dots, which we used squished in our hand rather than mounted.  I made a lovely sunset coloured easel card and came home to play with cool blues.  This uses a couple of shades of blue ink, blueberry embossing powder and a Stamp Addicts silhouette stamp.  If you're thinking the sentiment would be better stamped direct you would be right - until I smudged it that is - so I used a trimmed off scrap and mounted it proud of the card as if that was what I'd intended all along lol.

Second card is another Stamp Addicts stamp bought today, she's adorable isn't she?  I've doodled a puddle and a border, the sentiment is Rubber Romance.  She's coloured with Copics and I have used a flesh colour, didn't want her to look blue with cold, that would be a real English summer card!  Otherwise she is totally shades of blue too. 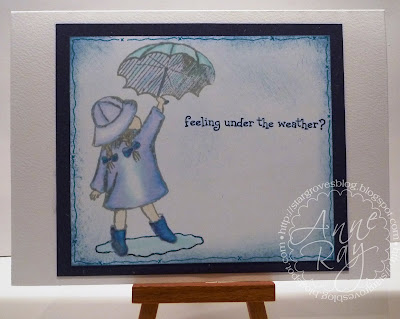 My cards are for the following challenges:
Less is More - shades of blue
Simply Create - silhouette
A Spoonful of Sugar - get well card (2nd card)
Stamps R Us - there was a little girl (2nd card)
Posted by Anne at 22:05