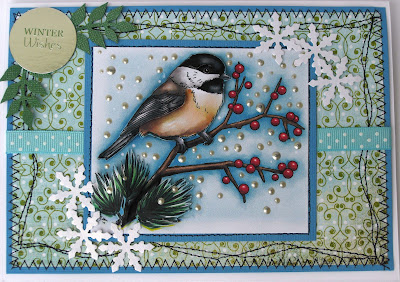 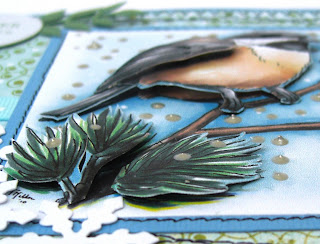 It's absolutely perishing here but at least we only had a light dusting of snow.  It's a day to be indoors crafting and I didn't enjoy doing the outdoor chores at all!  I've made a card using one of Fred, She Said's lovely pre-coloured images from the Christmas Bird Series.  This is the Chickadee, I've printed him 3 times and decoupaged him as well as the pine branches.  His head and wing markings are highlighted with Glossy Accents and I've added some "snow" to the snow Tracey already drew, using Liquid Pearls.
I've turned this week's Midnight Madness sketch on its side and followed it, adding lots of stitching, snowflakes punched from pearlescent card, ribbon, a sentiment from Craftwork cards and a few more 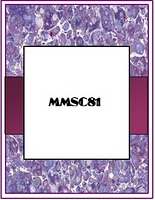 branches.  It's hard to see but there's stitching around the image on its frame too.
My card is for the following challenges:
Midnight Madness - sketch
Craft Your Days Away  - texture
The Crafty Pad - snowflakes
Bah Humbug! - feeling the blues
Crafty Sentiments - Christmas
Simon Says - let it snow!
Posted by Anne at 17:03