No Stamping... just a lot of folds 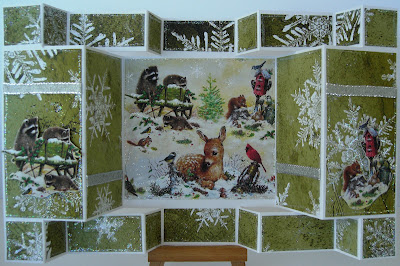 After I made the double display card on Friday, using Paola's template (THANK YOU Paola!), I realised that these aren't difficult to make, just a bit fiddly.  On Joanna Sheen's forum she is challenging members to make a card using a new CD, Giordano Christmas and there is an image available for those of us who don't yet have the CD.  I printed it so that it would fit into the double display card and added a free downloadable paper from Summer Driggs called Believe.  I've added some silver glitter to the image and the DP with a glue pen as well as some silver ribbon.  I didn't decoupage anything in the image or the card wouldn't have folded properly, so I put a couple of them on the front panels with Pinflair glue.

I've found a new-to-me challenge blog called CD Sunday Challenge, which says it has lots of followers but few challenge entries.  But there are plenty of us using DP if nothing else!  This week's challenge is Monochrome and while I have to admit that I can't complain if they disqualify my card, it's main element is greeny/brown but with a couple of bits of colour...  so I'm entering it and wishing them lots of luck getting more entries:).