You light up my life - Simon Says Challenge 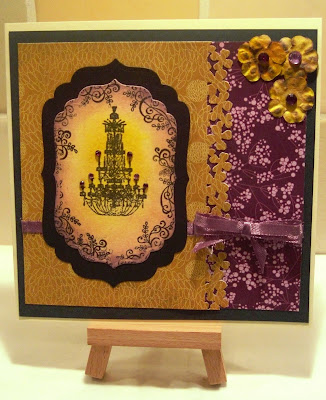 I've had such a fun day, stamping almost all day and only breaking off for a spot of craft shopping, but the only card I have to show you is one I finished up first thing this morning. I've enjoyed a day long visit from a crafting friend. We've "talked" online and met just once before so you might say that isn't a friend, but when you have that good a time crafting together the only word that fits is friend:). Can't wait to do it again sometime. I've lots of ideas and images for new cards, but in the meantime here's something finished I can blog.

This week's Simon Says Challenge calls for a recipe of three different types of embellishment, two DPs, one image. If you have them, the Simon Says Team is also asking that you use Stampabilities images. I do have a few and I hope to have a second entry and do that. But in the meantime, I wanted to use my chandelier stamp that I bought last November at the NEC and which has been waiting for its turn in the spotlight. I bought a Prima set of two chandeliers, two corner pieces and some diamond bling for £1.99 - can't beat that for value!

I cut out my piece of card with Nesties Labels 4 and then I used Distress Inks to colour the background (scattered straw, tattered rose and dusty concord). The chandelier was stamped onto it and and Personal Impressions swirls added around the edge. Ack, just realised, I hope the swirls don't count as a second image... The two DPs are Basic Grey Wisteria, the edge of the mustard coloured DP is punched with a Martha Stewart hydrangea punch. My three embellishments are the ribbon, the flowers (white, coloured with the Distress Inks) and the gems that are attached to the chandelier and the centres of the flowers.
Posted by Anne at 21:18