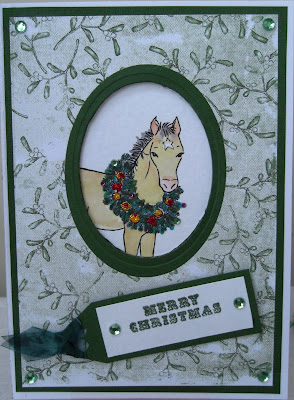 I'm really excited that I've been picked to be on the Cute Card Thursday Design Team for two weeks as a guest. For my first week, the challenge is to make an aperture card, something I've not done very much before. I reached for one of my favourite images this Christmas, Christmas Colt, drawn by the up and coming Phindy O'Neill who I predict will be the next big thing in digi artists for 2010. Phindy has a group on Papercraft Planet, a blog and an Etsy shop so there are plenty of places to keep up with her new designs :).

I broke into one of the gorgeous Magnolia papers that I bought at the NEC for this card, it was time it got cut rather than stroked:). I added a frame to the aperture that I wanted to cut and tried to cut it with my Nesties. Disaster! I'd upset the Big Shot with too many layers and it just wouldn't play ball when I asked it to cut matting card, DP and more card. At least it had left an imprint of the oval so I cut it out with a craft knife and let the Big Shot put its feet up with a cuppa - LOL!

I made a label and added a sentiment (Papermania), gems and a ribbon to it. With a few more gems the front of the card was done. 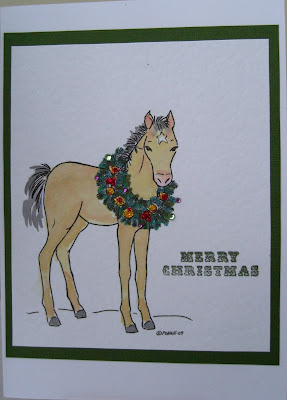 The inside of the card showcases the colt image with that Papermania sentiment again. Isn't the colt just beautiful? The card is for a friend who looks after our horses when we are away, he'll certainly appreciate it:). Coloured with Distress Inks as well as Copics for the wreath. Stickles and tiny gems added to the wreath.
Posted by Anne at 08:30