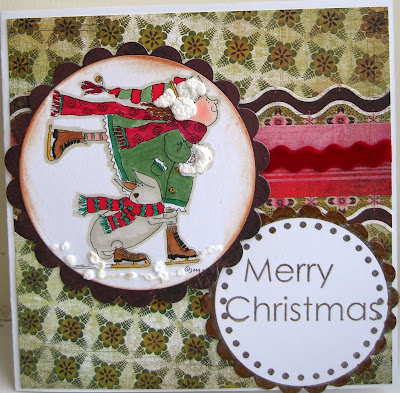 This is the first Christmas card I've made with Mo Manning's wonderful digital art. It stars Bronte, the grumpy sort-of cattle dog that Mo's family gave a home to. The image is coloured using that classic, favourite colour combi of red and green, to enter Copic Creation's challenge this week. I used Woodware Fluffy Stuff for the fur trim on the hat and muff, just squeeze it on and heat it to make 3d, fluffy snow. Or, in this case, furry trim :). Isn't this a fabulous image to use? I love it... 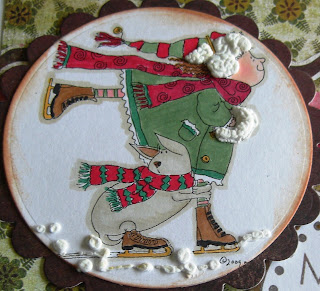 The Merry Christmas is a clear stamp I've had in for ages, added to one of the Creative Expressions circles that are designed to fit Nestabilities. I've embossed with brown ink that isn't intended for embossing and didn't like the cool, metallic grey-brown that I ended up with. So I coloured it with my brown Copic - much better. All the DP is Basic Grey Infuse, which is not a Christmas set as such, but I think it works really well on a Christmas card. I cut along the wiggly design lines for the centre strip, added a narrower piece of pink stripe and then the most beautiful velvet ric-rac that I bought at the quilt show. I couldn't resist it but it was quite pricy, so it'll be on special Christmas cards only :).
Posted by Anne at 12:25