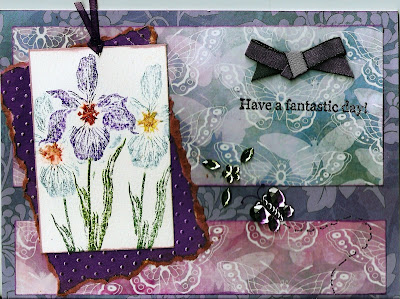 Sukkersott has a very pretty sketch this week which I used to make this very mauve card :).  I also dry embossed it, making it also eligible for Penny's Black's embossing challenge.
The Penny Black stamp used is called Rainbow Flower, it was a Christmas present from my older son (Ithink they were both force marched to the craft shop by my DH :)).  It's coloured with Marvy le Plume markers and some Stickles added at the centre of the flowers.
It's mounted on a piece of pearlescent purple card that has Swiss dots embossed on it, using my friend Janet's Cuttlebug folder - let me know when you want it back Janet! - the card has torn edges inked with Tim Holtz tea-dyed ink and then pink chalk ink.
All the papers are from Graphicus Guild.  The butterfly crystal was given to me over a year ago after a card swap.  His trail is marked with a Pigma pen and holes put through the paper with my prongy tool to make faux stitching.  The other crystals came from my DH.
Posted by Anne at 20:46