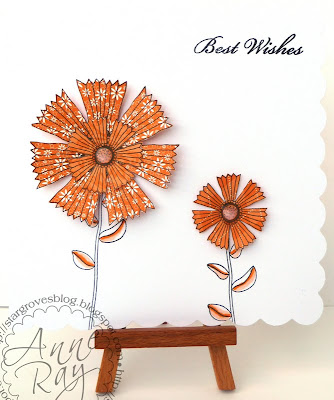 The less is more style does not always come easy to me, I find it easier to keep adding rather than take it away:).  This card is an exception and I'm really pleased with it.  I bought the Hero Arts flower stamps with the idea of doing lots of paper pieced flowers with them and remembered some orange cardstock I have.  I won a challenge for the first time ever, probably a couple of years ago and my prize was lots of Stampin' Up paper cut into 6" squares.  I've used lots of it but not the orange.  Don't get me wrong, I do like orange but it does need a lot of space around it and less is definitely more wth it!  The sentiment came from a Papermania set and I've added a big blob of Glossy Accents rather than a brad in the middle of each flower, which makes it a card that won't need extra postage.  The paper is double sided the even the underneath of the blooms is orange.
Challenges:
Less is More - monochrome
Bearly Mine - anything goes
Crafts & Me - stamp something
Clear it Out - paper piecing
Mark's Finest Papers - flowers